Press About Me Performing:

“Bent is heavenly. She is magnetizing as a performer, drawing you in with every smirk and line. Eliza Bent is a star on the rise.”
– Theater in the Now

“The always fantastic Eliza Bent delivers Eliza’s monologues on book burning with hilarious deadpan, until her emotions start bubbling to the surface, making a case that the fires she creates are not necessarily about the books at all.”
– New York Theatre Review

“Eliza Bent … has an unfailingly graceful simplicity and pitch perfect timing. You can watch her do anything, or nothing at all, and she will manage to surprise and to alarm you.”
– Theater Is Easy 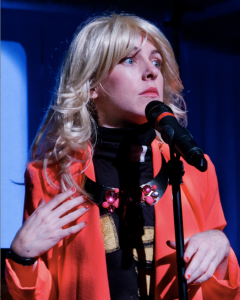 “Both as a performance artist and a wry confessor, Bent makes an impression. She’s this generation’s answer to Amy Sedaris: frank, weird and immensely likable.”
– Time Out New York (Critic’s Pick)

“Bent is a hilarious physical comic in addition to a clever, detailed writer, and clearly relishes each character’s idiosyncrasies.”
– New York Theatre Review

“Bent’s performance is understandably comedic but also tremendously convincing in dialect and sensitive characterizations ranging from a fashionable Italian woman to a bearded old man with a collection plate, to a nuanced Jewish woman from Long Island.”
– Theater Is Easy 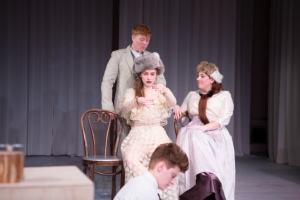 “Eliza Bent and Jess Barbagello are standouts as pseudo versions of Masha and Treplev.” – The New Yorker full text

“…curtains flutter as a grumpy Masha (Eliza Bent) cruises by on a skateboard.” – Time Out New York full text

“Masha (Eliza Bent), in a fur hat and long Victorian lace gown, looks at once china doll and Williamsburg thrift shop, gliding across the stage on a skateboard, or pulling out a mike and breaking into a lite metal tune, in Russian.” – New York Theatre Review full text

“… and the best among these is Eliza Bent‘s terrific monologue.”—the L magazine 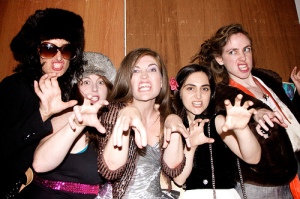 “The company is full to the brim with killer talent: Coltish Eliza Bent does her arch “I’m not performing” shtick as one of Frarajaca’s dance-team buddies…”—Helen Shaw, Time Out New York

Babes in Toyland
directed by Michael Levinton with Little Lord

“Tuner’s bit players frequently shine, as well — Eliza Bent swerves onto the stage just before the show ends as Svetlana, Qveen of Chrrristmas, a character who benefits immeasurably from the Ukrainian hooker vibe Bent gives her.”—Variety