INDEED, FRIEND!
a play set in the basement office of an undergraduate art and literature magazine

Indeed, friend! has been developed at Berkeley Rep’s Ground Floor series and had a workshop production in fall 2018, directed by Knud Adams, with Clubbed Thumb and the students of NYU’s Playwrights Horizons school. Cited on Steppenwolf Theatre’s “The Mix” list.

BONNIE’S LAST FLIGHT
a play on a tarmac, in the sky, and on the brink of descent

“Welcome to the wild imagination of Eliza Bent, the author of this madcap journey, and the actor playing Mark Twain, the late humorist who acts as a magical narrator in this faintly immersive comedy set in the present day. Sure, it’s silly. But Bonnie’s Last Flight isn’t merely some hokey send-off of air travel in the age of Ryanair-style austerity. It’s more like an existential Airplane!—full of weird humor and surrealism as well as genuinely sympathetic characters questioning their place in the world.”
Jordan G. Teicher, Exeunt

“The most charming cast member is the playwright herself, Eliza Bent, who appears as the sprightly and puckish specter of Mark Twain…He even pitched in with the crew’s effort to come through the cabin and collect any trash, and the thrill I got when he graced my aisle returned me to my earliest childhood experiences with live theater, the wonderment of coming face to face with a figure of pure charisma.”
Abigail Weil, The Theatre Times

Bonnie’s Last Flight was a New Georges supported production and was developed at SPACE on Ryder Farm, through a New George’s Audrey Residency, an LMCC Process Grant and through BRIC’s Residency program.

ALOHA, ALOHA, OR WHEN I WAS QUEEN
a solo piece that explores whiteness, wokeness, and various forms of privilege

“A smart, funny exploration of cultural appropriation in the tradition of the great solo performers.”
Taylor Black, Theatre Is Easy

“…the kind of candid introspection many of us should be undertaking — though probably funnier and sweeter than most of ours would be.”
Miriam Felton-Dansky, Village Voice

Jerry Lieblich on Aloha in Culturebot.

On a Clear Day I Can See to Elba takes on the solipsism of love, the maddening aspects of intimacy, and the curious nature of self-hood within a relationship. Lambrusco, Queen, and geraniums populate the on-goings in Bent’s two-hander. ELBA ultimately asks: What is the nature of self-actualization within a couple?

ELBA in the news:
Feature in Culturebot
Interview in Stagebuddy

TOILET FIRE
A ritual of digestion with liturgical trappings

Toilet Fire is a ceremony and celebration of the one thing that unites us all: our need to go. Using the structure of an ancient religious ritual to talk about matters of digestion, philosophy, and faith, Toilet Fire, written and performed by Eliza Bent, directed by Kevin Laibson with accompaniment by Alaina Ferris, explodes with song, audience participation, and unexpected textual twists. This tour-de-toots ultimately asks: How can we best relieve suffering? There will be puns. There will be poo. It shall be punderful.

Performances at JACK and Abrons Arts Center in 2015 and the Brick in 2016 Workshopped and developed at New Georges, Catch!, Great Plains Theatre Conference, and Dixon Place.

PRESS for TOILET FIRE:
“Both as a performance artist and a wry confessor, Bent makes an impression. She’s this generation’s answer to Amy Sedaris: frank, weird and immensely likable.”
—Time Out New York (****Critic’s Pick)

“A tremendous new solo work about what we usually keep behind locked doors.”
—Keith Paul Medelis, Theatre Is Easy

“Even the most gastrically sound theatregoers are likely to find communion in the church of Bent.”
—Ben Gassman, American Theatre

“Bent is a hilarious physical comic in addition to [being] a clever, detailed writer.”
—Breanna Foister, New York Theatre Review

“What Bent is doing with Toilet Fire is important. She does what most haven’t, won’t, or can’t, whether out of superciliousness, inability, or self-doubt. She is not afraid to be as bizarre and puerile as she wants to be in the name of entertainment.
—Brett Aresco, HowlRound

“Marveling at the comic genius of rising star Eliza Bent, creator and performer of Toilet Fire, which is a play that manages to make bathroom humor somehow not embarrassing.
—Of a Kind 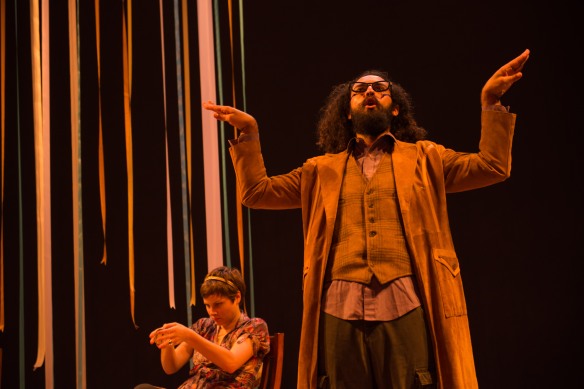 PRESS for The Beyonce:
“Bent has family friend Sasha (Noel Gaulin) become a vegan hipster and Nadia admit her planned honeymoon to Hawaii is less than exotic by calling it total “normcore.” Although these changes might seem superficial and simplistic in less able hands, Bent is an artist and truly enlivens the source material by giving the burgeoning feminist Nadia a fresh relevance…this two-course offering has a very satisfying finish.”
—Austin Chronicle 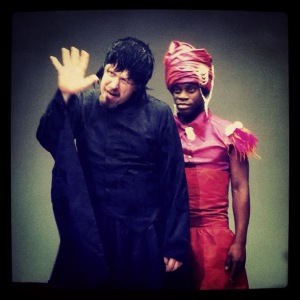 Production at the Incubator Arts Project (Dec/Jan. 2013/14).
Developed at MacDowell Colony and the Orchard Project.
Published by Samuel French.

PRESS for Blue Wizard / Black Wizard:
“The closest thing we’ve ever seen to a stoner musical!…And that’s not a bad thing! We felt high just being there! Wizards! Existential crisis! Donuts! Wonton food and wonton thoughts! So much to love about this show…blissfully surreal!”
-Perez Hilton, Perez Reviews

“A delightful take on contemporary ennui and the search for meaning in a post-recession, celebrity-conflict-obsessed culture. Equal parts Tolkien, MTV game show, Ziggy Stardust, and John Hughes movie…The text and music, by Eliza Bent and Dave Malloy (who are also our wizards), are shape-shifting satires of genre: the characters are never in the place they want to be, never satisfied with the relationships in and with space and time, their genre of the moment peters out as quickly as it is presented…This sense of defiance is served well by the direction of Dan Safer, whose wonderful experiments are infamous for their indeterminate structures, game-like challenges, and playful, but precise movement.”
-The Obscene Jester

“A mash-up of classical art, modern pop culture, depression inducing anxiety, electronic music, pole dancing, and mystical battles for the future of mankind’s very existence…. Beyond just a mash-up of themes, Blue Wizard / Black Wizard is a mash-up of forms…strange and funny and sad in a way that only this generation can be.”
-Adam Cecil, NYU Local

THE HOTEL COLORS
A jankity hostel on the outskirts of Rome. Written in direct translation from Italian into English.

Press for The Hotel Colors:
“In using the distancing effects of language as a blunt instrument simultaneously to create strangeness and cut more deeply to the heart of human experience, Ms. Bent follows a long tradition of adventuresome playwrights…[she] captures the desultory passage of hours, taking her time to reveal the characters’ inner worlds, which are no less deeply felt for being unremarkable.”
– The New York Times

“…delightful…Bent’s formal conceit—first very droll, then more and more moving—is that her characters do all this in dialogue literally translated from Italian…the choppy syntax and orphaned proverbs become figures for the dislocation and yearning of Bent’s characters—and our own. The characters have trouble communicating with each other and with us, but that only makes their flailing attempts at connection more heroic.”
– Village Voice

A bizarre physical score is set to the equally strange micro-fictions of Russian avant-gardist Daniil Kharms. Karma Kharms (or yarns by Kharms) creates a Russian village (with a cast of 16), boasts a live origami set that unfolds and features a slide and original music. An investigation into the absurdities of life in Stalinist Russia (and other totalitarian states) made with deadpan cheek and aplomb.

Toilet Time with Eliza Bent (Dec. 2011)
Fart art and philosophical ruminations rub up against each other in Bent’s tour-de-toots.

Other iterations of Toilet Time have flushed at Catch! 50 and the Great Plains Theatre Conference in Omaha, Nebraska in May 2012. http://vimeo.com/34095085for password email me…!
photo by Mike De Angelis at Catch! 50

Trumped! (May 2011)
While working at the world’s largest fashion magazine, a young Bent meets Donald Trump. A monologue.

Trumped bowed at Ones at Eleven as part of the Solo Nova festival at Performance Space 122.

Press for Trumped:
Off Off B’way
YellowGurl

Pen Pals Meet (March 2011)
Bent and Salar, her pen pal in Tehran, meet for the first time over Skype and have a conversation.

In 2008 Eliza Bent received an email from Salar Sardary, an Iranian university student, who asked about how to view American Theatre Magazine online. From that interaction, an unlikely sporadic pen pal friendship formed. Two years later the pen pals meet officially over Skype and have a conversation, live on stage.

Performed as part of the Iranian Theatre festival at the Brick Theater in March 2011.

Public Proposals (or smile crying) (Feb. 2011)
A ten-minute play about how women seem to smile cry when they talk about getting engaged.

Produced and performed at the Independent Actors Theatre of Missouri

Blue Dress Reduction, was written and performed in collaboration with my pals from high school Jasmin Hoo and Elizabeth Stevenson under the direction of Megan Finn. It received a workshop production at the undergroundzero festival in New York City in 2010.

Press :
Real Time Arts
“Easily the funniest and most immediately charming production at the festival…Bent has the makings of a great comedienne”–Matthew Clayfield

This adaptation of Hari Kunzru’s short story “Magda Mandela,” complete with a Greek chorus and electro beats, was directed by Jose Zayas and bowed at the undergroundzero festival at Performance Space 122 in July of 2009.

More images by the fabulous

Press for She of the Voice:
Time Out New York
“Sadly, my two favorites (writer-performer Eliza Bent’s rascally amuse-bouche She of the Voice and Emily Conbere’s pitch-black satire The Jamal Lullabies) have already finished. For those who have gotten on TONY-contributor Bent’s bandwagon (David Cote talked to her here), you’ll have plenty of other chances to enjoy her coltish chic at the Ice Factory‘s Babes in Toyland.“–Helen Shaw
link to full text

Village Voice
“In episodic, revue-like fashion, the denizens sing, dance, kvetch, and regale us with favorite anecdotes of their beloved Magda—her claim of being Nelson Mandela‘s love child, her bedding of several musicians, her dismissive expletives.”–Carrot Eisler
link to full text

OTHER NOT-YET-PERFORMED WORK
The Story of Skule (2009)
A shy Icelandic fisherman wins a trip to Jamaica.

Twain’s on Main (2011)
A used bookstore is in decline.
photo credit: Raul Gutierrez

Don’t Go Near the Quarry

list of plays
amazing plays
omg you are famous